​The inaugural River of Flowers was held on 22 February 2012 for the first anniversary of the devastating Canterbury earthquake. It was created Michelle Whitaker under Healthy Christchurch with the Late Evan Smith of Avon-Otakaro Network. Every anniversary the event provides communities with the opportunity to reflect and look forward to the future together.

The River of Flowers is an opportunity to:

- Come together as a city through a river of flowers
- Let go through dropping flowers into the river
- Hold two minutes of silence to remember those who have died, been injured, or who have lost their homes
- Write notes of hope and post them on a tree of hope
- Acknowledge the importance of the river(s) in the life and heritage of the city
- Give a token of respect back to the river(s)
- Show the connections between communities - particularly those most affected
- Celebrate our strength - resilience and supporting one another

​​River of Flowers have supported local communities hosting their sites for each anniversary of 22 February 2011,  Cantabrians have shared their experiences and hopes for the future as part of the River of Flowers commemoration.

Up to 20 River of Flower sites have been held on the anniversary along Canterbury waterways making them part of our communities earthquake recovery story. Sites have been along the Avon and Heathcote rivers, at the estuary including some years at other Canterbury tributaries including the Liffey River in Lincoln, Canterbury University and in St Albans.

In Japan, the crane is a mystical creature and is believed to live for a thousand years.  As a result, in the Japanese, Chinese and Korean culture, the crane represents good fortune and longevity. Japanese refer to the crane as the ‘bird of happiness’. Traditionally, it was believed that if one folded 1000 origami cranes, one’s wish would come true. It has also become a symbol of hope and healing during challenging times. As a result, it has become to fold 1000 cranes (in Japanese, called “senbazuru”). The cranes are strung and given as gifts.
A famous story about senbazuru is that of Sadako Sasaki, a little girl who was exposed to radiation as and infant when the atomic bomb was dropped on Hiroshima. Although she survived the bomb, she was diagnosed with leukemia by the age of 12. She decided to fold 1000 cranes, hoping that her wish to live would come true.   Unfortunately, she only was able to fold 644 cranes before she passed away.  Her classmates then continued to fold

cranes in her honour and she was buried with a wreath of 1000 cranes to honour her dream. There is now a statue of Sadako in Hiroshima Peace Park – a little girl standing with her hand outstretched, holding a paper crane. Every year, thousands of wreaths of senbazuru are draped over her statue.

Steve Moffatt, the owner of Moffatt’s Flower Company, has been in the business since 1980, and for the last five years has been providing, free of charge, flowers for the ‘River of Flowers’ Christchurch Earthquake commemoration event. However, the years in this business have not been easy ones, particularly those leading up to, and including the events of 2011.

Hit hard by the September quakes, Steve’s business also suffered as a result of a boiler fire in January 2010. “In January we had a fire. We converted the burners from coal to wood to become CO2 neutral. There were issues with the boilers, we lost most of the plant.” It was a very emotional time for the business and his family, and to further the company’s damage, the plant in Christchurch was devastated by the series of earthquakes in September 2011.  “We have 4 hectares of glasshouses; glasshouses and earthquakes don’t mix. It’s been tough.” There were times that Steve thought his business wouldn’t survive. Something he shouldn’t be criticised for, considering these events. “The 3 years after was the hardest as a rose crop takes 12 months to fully mature, so it obviously made things difficult for us.” Steve’s business however, is supported by a fantastic team, and has managed to come out the other side, now blooming again with flowers.

Moffatts Flower Company is now one of the main contributors to River of Flowers providing flowers for the event each year. “Everyone in Christchurch was affected to some extent…” River of Flowers, an event held each year in commemoration of the Canterbury earthquakes, gives people the chance to reflect on their experiences and share their hopes for the future. People come from all over the city to drop flowers in the river and write messages of hope. Steve feels that River of Flowers provides a time for people to think about their lives pre-earthquake, and how the events have changed the way people live. “Everyone in Christchurch was affected to some extent. It’s a time to reflect back on how we were pre earthquake, and what it’s done, the emotion and the difficulties we’ve been through, and to think about the things that have actually changed within us”.

The flowers provided by Moffatts Flower Company are an integral part of the River of Flowers, and are a representation of the many different emotions and experiences of the people of Canterbury. Steve and the people of the company, take happiness in the thought that these flowers can provide this passage of emotion for the attendants of River of Flowers, and be a part of helping the healing process. “I think flowers can say so much. I’m just as delighted if someone picks some flowers out of the garden and gives them to someone. It can cover so many emotions without actually saying anything or costing a lot of money. Flowers make people happy”. River of Flowers are multiple  commemoration sites focusing on helping people reflect on the past, letting go of negative emotions, and concentrate on looking to the future. Just like so many of the people in Christchurch, Steve and Moffatts Flower Company, can see the city beginning to bloom again. “I think the future of Christchurch is fantastically vibrant! Christchurch was, and still is a great place to be, and it will only get better”. It is clear that there is much to look forward to in watching Christchurch take shape again.

River of Flowers - Site Information 2022
​​​The Canterbury Earthquake National Memorial will not have a Civic Commemoration Service due to Red COVID-19 alert level. This year River of Flowers encourage to pop by any of the 11 community sites. Some sites may be hosted by local Community Organisations  and run 12.30 to 1.30pm or may just be locals coming together. All Welcome.

An interview with one of our amazing supporters 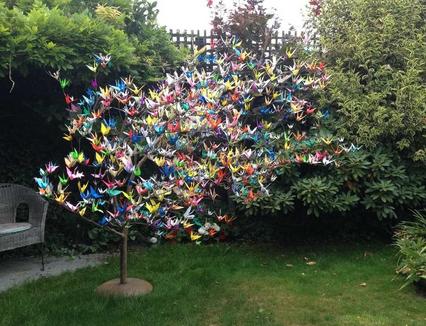 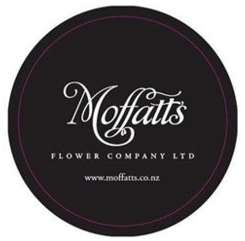 1000 paper cranes - were folded with love by many children and adults from around Aotearoa, New Zealand and the UK between 2011 and 2014 in memory of those who died in the February 2011 Christchurch earthquake.
This was co-ordinated by Kate Morgan of Nelson who then donated them to the River of Flowers commemoration initiative.
Christchurch artist Nicola Baird has lovingly turned them into an installation for the fifth anniversary so they can be enjoyed by Cantabrians. Mixed media; paper cranes, willow branch and lamp stand.

The 1000 Cranes were hosted in the Foyer of the Cardboard Cathedral for the Anniversary week 2016. They are now hosted in Christchurch Community House on Tuam St.

The River of Flowers is a partnership commemoration project led by Flourish Kia Puāwai and Avon Otakaro Network.

Bloom in 2016 was a collaboration between River of Flowers, Canterbury Museum and Poetica.

River of Flowers acknowledges the support of many community organisations.

​  The River of Flowers facebookhas up to date information about the events before and during 22 Feb 2021.​

Thanks to all our Collaborators and our 2022 Funders: Christchurch City Council.