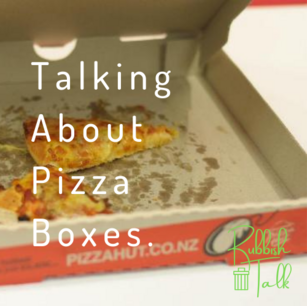 They're a cardboard box so why not the Yellow Bin if they aren't that greasy?
You can rip the top off if it isn’t greasy, and recycle it.  We do have a guide for our auditors as to what constitutes too greasy for recycling versus acceptable. As we have green bins, we do ask residents to put them straight in the green bin.…the vast majority of pizza boxes seen are fairly greasy.

Why do you prefer pizza boxes to go in the green bin, how does it help the compost?
Clean cardboard in the yellow recycling bins is sent to paper mills overseas for processing. However, dirty cardboard isn’t accepted in the recycling. This is due to oil having soaked into the fibres. Oils in water, hinder the re-pulping process, where cardboard is being reconstituted into new items.

However, we also ideally don’t want this cardboard in the red bin, i.e. landfill, as organic material in landfills both release methane, and it is expensive and a waste of this potential resource to dump it.

Therefore, the best solution is to put it in the green bin (or home compost). It adds carbon to the compost, as it is originally a wood product. An additional win is that the compost is processed just down the road in Bromley, then sold within NZ, largely locally which means less carbon miles too. Added to home compost, ripped up cardboard introduces air and carbon and soaks up moisture, so can be a valuable addition to create healthy compost at home.​