​'We hold the earth' 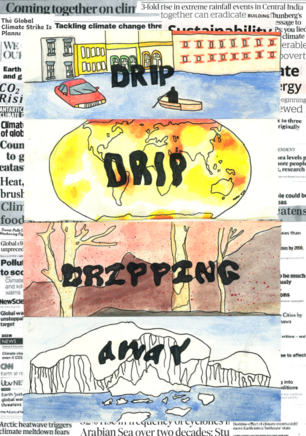 Launched on Mother's Day 2022, this inaugural and meaningful competition was inspired by the UK Our Other Mother campaign by Parent Climate Groups and professional artists. Here in Aotearoa, we wanted to hear from our kiwi kids, both their love and their concerns for Our Papatūānuku, Mother Earth.

Although unfunded for this first year (fingers crossed for next year), we had a couple of passionate volunteers and ten amazing judges who care about our young people and the environment. We had entries from North of Auckland to Stewart Island, from Homeschoolers, Teen Parent, Primary, Intermediate and High schools. The organisers and judges were impressed by the wealth of knowledge and talent, but also feel the fear expressed by this generation in light of pollution and climate change.

We aim to hold these young people and their entries with care and integrity that they deserve, treasure them in a book and share it with the world at COP 27 (United Nations Climate Change Conference), in Egypt November 2022.

​Flourish Kia Puāwai congratulate the amazing winners and entries, it was tough for the Judges! We also thank you for the effort gone into these entries and the support by teachers, schools and parents behind these incredible kids in the midst of a pandemic.

The Earth from the Sky

Holding each other in the solitude of space.

Between them only darkness;

Their children, deprived of light.

The parents’ offspring start to cry,

For they wish to walk among the forests

And they long to see the sky.

Tūmatauenga was the first to say,

“We need more room to play,”

And so he put forth his suggestion

To kill his parents that day.

His other siblings, however,

Felt that violence would not do,

And decided the better option

Was to push apart the two.

So one by one, try after try

The children pushed, and attempted to pry

Ranginui from Papatuanuku: the earth from the sky,

But none were successful, and none could succeed.

Tāne Mahuta, the last of his kin,

Decided he had a chance, and a chance to win.

Placing his feet on his mother, and his hands on his father,

they put up a fight

And from the darkness emerged a kingdom of light.

The siblings were ecstatic, overjoyed, impressed,

​And declared the name, Te Ao Mārama, the place of the blessed.

Tāne revelled in the glow of the day

Tāwhirimātea, the god of the breeze,

He vowed to make his siblings pay

For pushing his mother so far away.

He whipped up storms and terrible wind,

To punish those who had sinned.

We can hear Tāwhirimātea causing gusts amongst trees

Lent to Our Papatūānuku by

The Day Before Matariki

Ragainui was crying once again,
Matariki was in a few days.
All happy thoughts and feelings were dripping down the drain.
The sun was hiding, trying not to show even a couple of sun rays.

Sitting down I stare into the outer,
Wondering what it would be like if Rangi and Papa were never apart.
Then again I shouldn’t be a pouter,
Because then I would have never seen Papatuanuku’s art

The Animals, The Plants, The Trees and the Enchants,
Our world is a once in a lifetime opportunity.
I will never get sick of the birds morning chants,
New Zealand is the greatest community.

Why We Need Bees

Across meadows of flax and mānuka drifts a speck of hope in the sea of indifference.

Faced with loss, death and destruction, the pī kuini, stops to mourn.

Seeking connection and co-operation,
the pī kaimahi join as one.

They repair, restore and regenerate,
so forests heal and flowers flourish.

They pollinate, proliferate and propagate, so food’s produced and waste’s reduced.

A champion of nature,
our endangered eco warriors.

The iti-pī, safe and strong.
The vital, humble, bumble-bee. 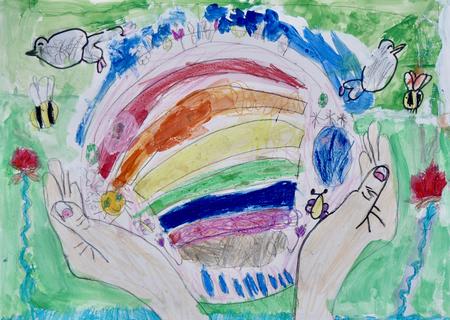 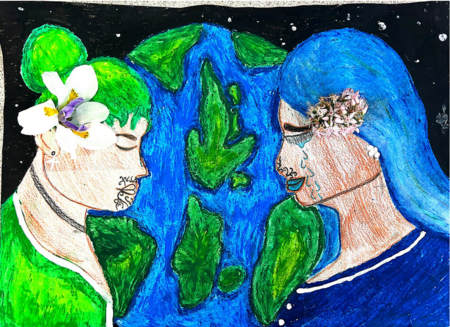 With greatest thanks to our 2022 Judges & Supporters

Meet the 'Our Papatūānuku' Winners !

If only there was a way to go back to the time when people and nature lived as one. In the world we live in today, humanity exploits nature as if it were its slave. This must stop. You have witnessed more than any human and you are the one who gives life to us all. Yet we show no respect at all.

In the last few centuries people have been constantly disrupting the delicate balance of nature. Tane Mahuta is crestfallen because people have introduced stoats and other exotic animals to Aotearoa, pushing native birds like the kākāpō, takahē, and kororā to the brink of extinction. We have also antagonised Tangaroa. He is being suffocated by all the pollution and feels anguish as many sea organisms are disturbed by the deafening noises and waves caused by boats and other motorised water crafts. The delicate peace Rangi maintains has been broken as planes, explosions, fires, rockets, factories, and power stations pollute the atmosphere. Rangi and his domain are poisoned.

In the distant past, the Maori only took what they needed from you to survive. Whereas today we are greedy and plunder you for more than we need, letting so much go to waste. This is what causes pollution. We need to stop trying to control all other life. We must change and start taking only what we need from you to survive, otherwise we will eventually perish.

From a Kiwi kid 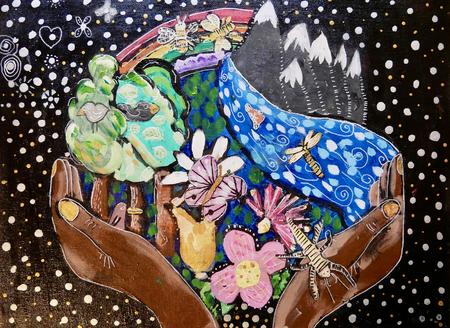 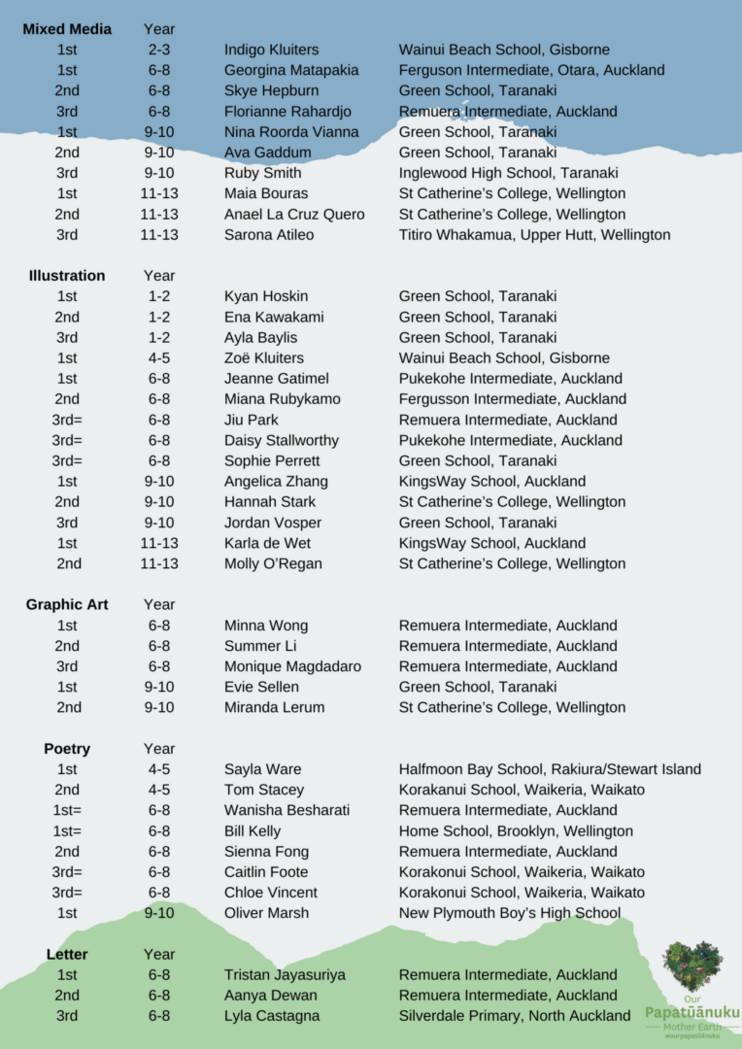 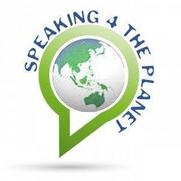 All the 'Our Papatūānuku' Winners

'Where the Wind Grows' 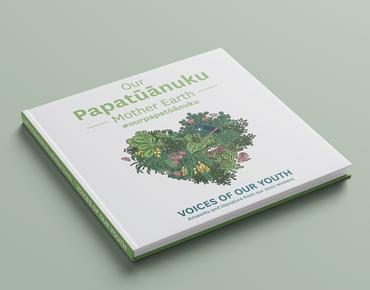 Utterly incredible. Every single one of these entries made me stop and think. Although the artists are young enough that we tend to think of them as the ‘next’ generation, these contributions demonstrate that they are the ‘now’ generation – already thinking deeply about, and taking ownership of, the issues that will dominate their lifetimes. 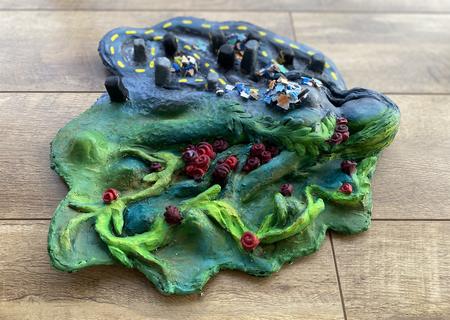 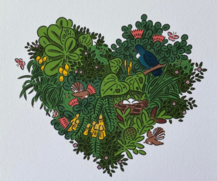 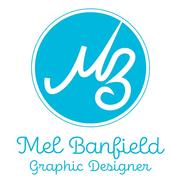 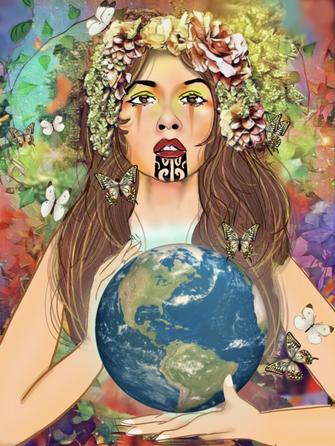 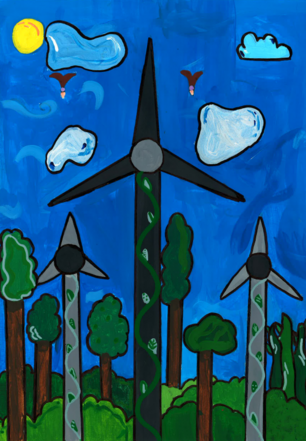 Once, forest high as the sky, wide as the earth, green as grass
Now, buildings higher than mountains, large as the planet, dull as dust
Soon, fires scorching the bones of Mother Earth, barren land as inhabitable as the moon

Once, melodies filled the air from beaks of passing birds, backs of beetles brighter than jewels, air as fresh as fish from the the sea
Now, smoke filled air, cucumber wrapped in plastic, sounds of traffic invade our senses
Soon, fires crackling and spitting up smoke, logs catching fire ‘till there’s nothing left

If, we say NO to fossil fuels, greed, plastic

If, we say YES to bikes, feet, mindfulness 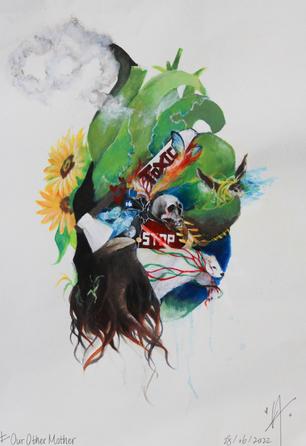 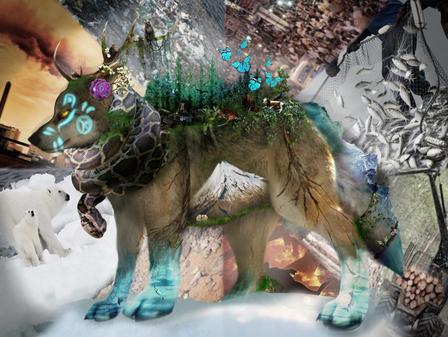 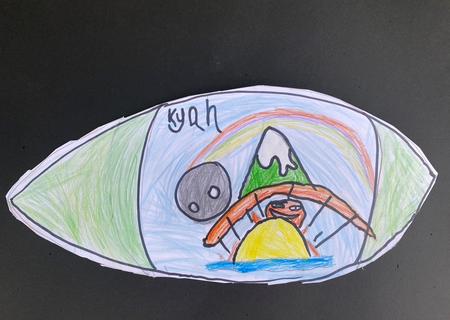 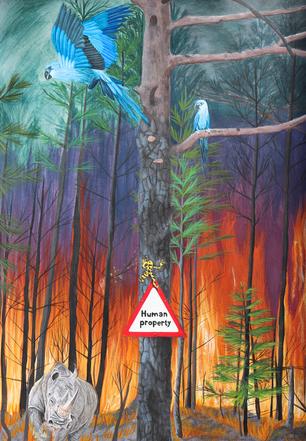 ​'Papatūānuku, through the eyes of the children of earth'